So I’ve got this autocross bug, despite being a terrible driver. After about 5 seconds of thought, I came to the conclusion that I must get an autocross trailer in order to improve my skills.

So, after a bit of research it looked like item #90153 was the thing to get. The key is it has 12” wheels, whereas the cheaper one (#42708) has 8” ones. The larger the wheel the less RPM the wheel bearings see, which is good. The increased payload capacity and trailer height were just bonuses. Since I plan on hauling some wheels and tires and some tools, I don’t see coming near the 1000+ lb. payload capacity. And if you wanted to carry more, all you’d really need is some better tires, since that’s the actual limiting factor. However, I don’t recommend carrying anything near the payload capacity.

Note that this is one of the few big-ticket items you can use the 20% coupon on, so if you want to save $46 or so off the price, use one! I got it and built it: 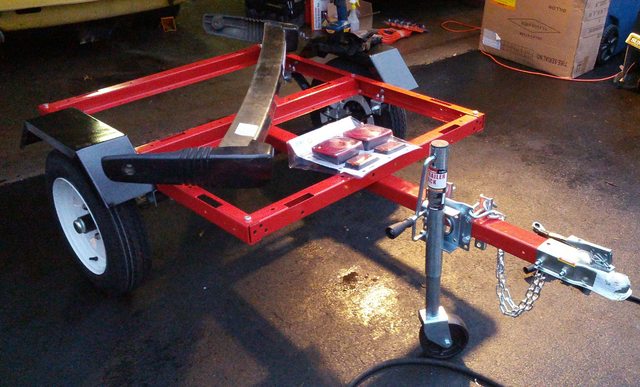 I also picked up a trailer jack, LED lighting kit, 1-7/8” ball, and ratcheting straps from HF. From elsewhere I got a backup alarm, more LED lights, battery tray, some wire and a voltage gauge.

I then painted the frame and wheels to match my 280Z: 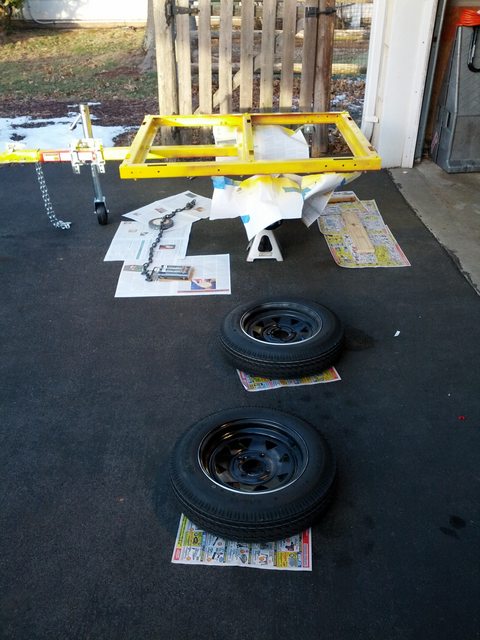 After that, I realized I’d forgotten to weld on the battery tray, so I had to grind away at my fresh paint and weld it on. I mocked it up to a few locations before settling right on the tongue bar. I need to keep as much weight forward as possible to keep the trailer from being too rear-heavy whenever I get wheels and tires on it-since those will be going on the back. It’s easy to get to and also makes wiring a bit easier as I don’t need so much thick gauge wire to get to the battery. 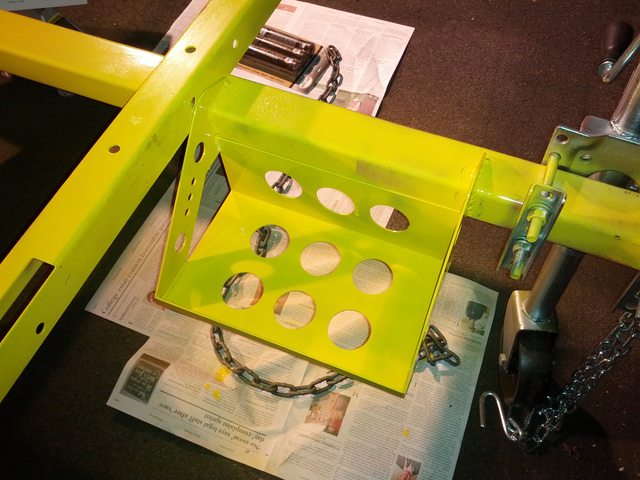 Speaking of wiring. I think I’m going to route it through the spare tire well, like shown: 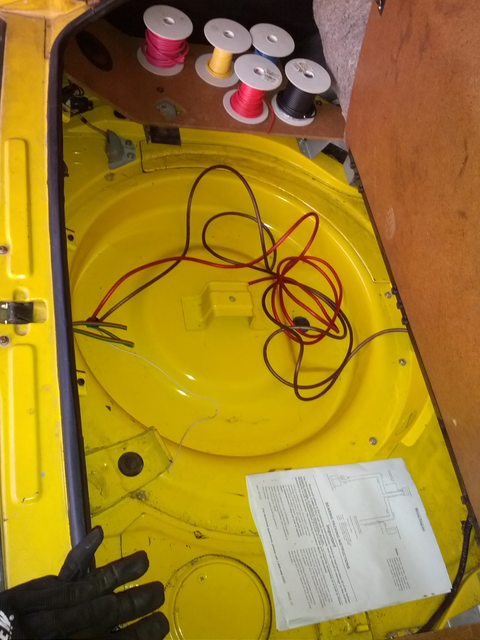 My main battery is located behind the passenger seat. It looks like I have just enough left over 8 gauge wire to cover it. I don’t have a spare 8 GA fuse holder and fuse, however, so I had to order that. The wire goes out the spare tire well, and through a convenient hole in the rear valence: 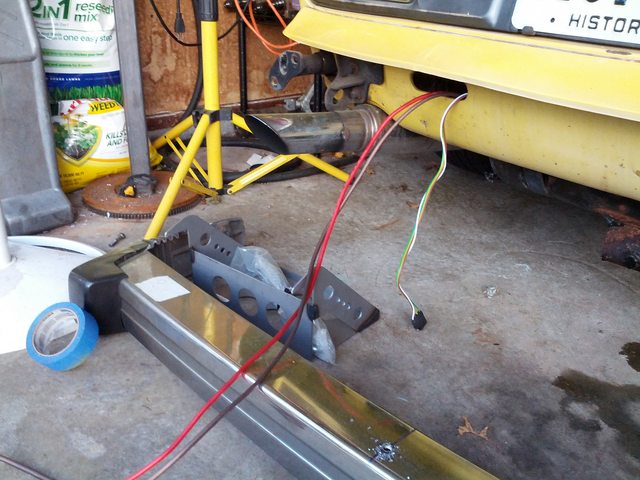 Here’s all the crap I’m going to hook up. Lots of LED clearance lights, a power inverter, some utility lights, a voltage gauge and lots of corrugated wire loom. The trailer wiring kits come with pinch/crimp connections which will just corrode and cause problems. I will be soldering it all and cover it with heat shrink. 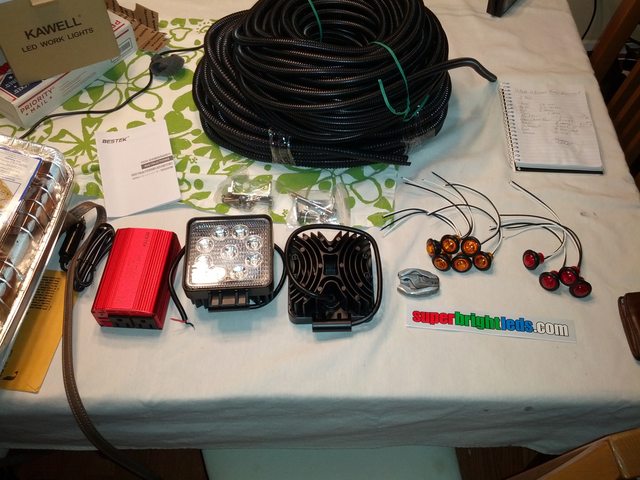 But, it’s been cold out so I haven’t had a chance to do the wiring. Also, my power drill is having trouble so I can’t even drill out the holes I need in the trailer properly. But, this is how it sits so far: 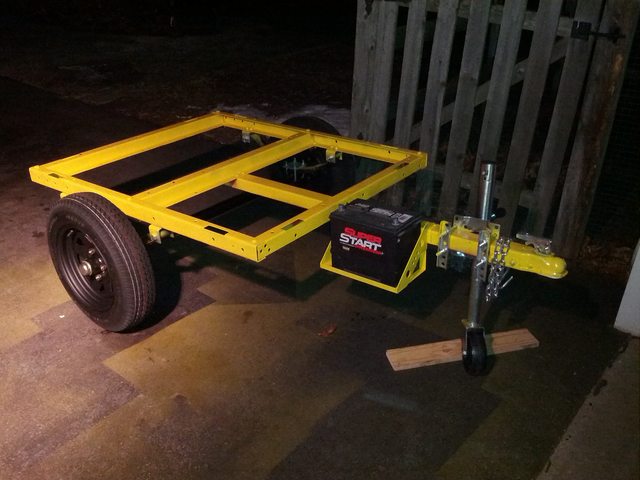 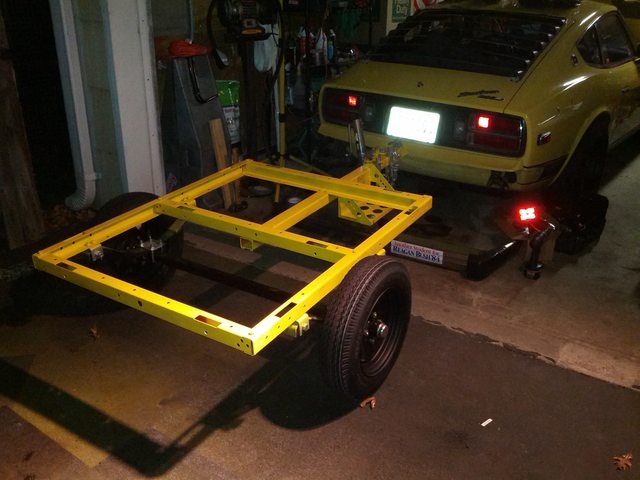 Looks pretty good. Still need a few more coats of yellow on the battery tray, but otherwise it came out well. I’m not entirely sure how the trailer jack is going to fit, as it’s pretty close to the tongue right now, but I’ll figure that out later.