Migrating to Firefox from Google Chrome

After Firefox Quantum was released, I tried it out and decided to switch. I had a few reasons why:

I was very impressed, especially with Tracking Protection, how much faster Firefox has become. Number 2 refers to all your browsing data being sent to Google HQ, encrypted I imagine, but still. And for number 3, on Android certain sites would have 3rd party ads that redirected the browser from the new article or whatever page I was reading to some spammy ad page. After discovering that you can run, say uBlock Origin, on mobile I was determined to switch.

So to switch, I needed two profiles (“work” and “personal”, always separate as God intended) and as I found out later, a way to get those two profiles as separate taskbar tabs-which was much harder than it should be.

Switching was not so easy. I’ve had Firefox installed, even with multiple profiles before but it’s definitely not as simple to setup as Chrome. In Chrome, there’s a profile button on the top right of the title bar that makes switching profiles easy.

In Firefox, when it first starts after a fresh install it asks you for a profile name but by default will not ever ask again. So you have to run firefox -profilemanager (after closing any and all Firefox windows), and add a new profile. 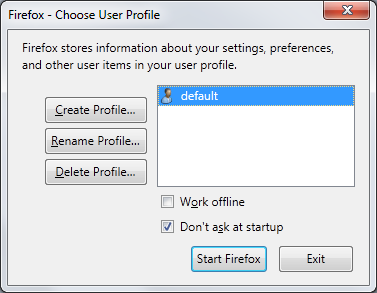 Now, you can setup this Firefox installation to allow multiple profiles, but this causes problems with the Windows (7 and 10, at least) taskbar. The separate instances have the same appId, causing both profiles' windows to be grouped. Which is annoying. And any shortcuts you make to each profile will not inflate with the respective process. In other words, your shortcut and the running application will both be visible at the same time, using up space. And if you click the shortcut, Firefox shows a dialog that complains it can’t start because it is still running. Ugh.

So forget trying to setup shortcuts and pin them to your taskbar for now. The best solution is to just run two installations of Firefox, each using a separate profile by default.

For work, since I’m a developer, I’m using Firefox Developer Edition. For personal crap, I just use regular Firefox. You might be able to install the same edition of Firefox alongside but in a different directory, but I believe the appId will still be the same. In my case, these each have separate appIds, so no issues. Install the second copy of Firefox, and then select the other profile you want to use with it.

Pin it to the taskbar, and your done.